Home › Uncategorized › Whatever it Was She Actually Was, She’ll Always Be My Siberian Forest Cat

Whatever it Was She Actually Was, She’ll Always Be My Siberian Forest Cat

Miss Messy, the amazing fence sleeper, back when she was still a stray.

Rewind to sometime this summer.  I took a picture of my big fluffball of a cat, Miss Messy, sleeping in the sun on a bench.  And to my horror, I saw that one of her long teeth was sticking out of her mouth at a strange angle, even though her mouth was closed.  Why horror?  Because the last time I saw that on a cat, he was deathly ill, probably from cancer, and all but starved to death (he wanted to eat, but he just couldn’t) and I had to put him to sleep two days later.  “Don’t you dare do this to me,” I told her.  Not yet.  She was only 8 years old.  Maybe not even that.  And I was not ready to lose her.

I deleted the picture and, instead of doing something sensible, like taking her to the vet (although what would I say?  Her tooth is sticking out; I think she has cancer?) I buried the memory in a box somewhere in my mind.

Fast forward to November.  I came home from a month away and Miss Messy was no longer the plump creature she’d been ever since I rescued her from the streets of France.  {And I do not use the term rescue here lightly.  Miss Messy was A- fixed and B- such a total failure of an alley cat that someone must have driven her out to our village and chucked her out of the car when they decided they no longer wanted her (perhaps because she never peed in the litter box, so much as beside it or, once she discovered it, directly on the warm radiator next to the toilet).}  But, you know, she seemed to be eating okay, so I chalked it up to spouse not having done as good a job of making sure the cats didn’t lose their food to the grey stray that someone threw out of their car here last spring, because apparently it’s not just the French who don’t have the moral courage to take their unwanted cats over to an animal shelter.

Fast forward again, this time to the end of the year, when we returned from a few days away at Spouse’s parents’ place for Xmas.  Miss Messy was shockingly thinner.  But, again, she was eating and so I figured the now morbidly obese grey stray (who immediately inhaled any food he came across, whether it represented two to four days’ worth or not) had just hogged all the cat food I had the Alpaca lady put out for my cats every day while we were away.

Then, toward the end of January, after she figured out she could scare off the dog and eat his food, which was fair enough; he was quite happy to eat cat food and then they both ended up with diarrhea.  But Miss Messy’s didn’t go away.  Ever.  And then she did that heartbreaking thing that dying cats do where they beg and beg and beg for food, but no matter how many hundreds of euros you spend taking them to the vet for antibiotics, cortisone shots, painkillers, and rehydrating IV drips,  and buying the every possible type of cat food known to mankind (plus canned fish), they just can’t bring themselves to eat.  All she would do was lick butter off my fingers.  Copious quantities of butter.

A few days after she stopped asking to go outside to sit in what little sun there was to be found at this time of year, she started to meow at me.  And this was a cat who never used her voice.  So what could she be saying but that she was uncomfortable or in pain and was hoping I could magically do something about it.

But all I could do was take her to the vet one last time and then bury her in her favorite spot in the garden.  That was more than two weeks ago already, and I still can’t grasp it.  I was worried that she’d be lost and lonely when Big Kitty, 8 years her senior, finally died.  Instead, I have a bewildered Big Kitty who has taken to doing nothing but sleeping on the sofa all day and all night long, except when she’s wandering aimlessly around the house, as if she’s depressed.  Half an hour after we buried Miss Messy, she was out there, sitting beside the grave, which is in a spot that Big Kitty doesn’t normally frequent, and that broke what was left of my heart.

Eight years old at the most.  The vets were perplexed, except to say that stray cats are full of horrible viruses.  Which is true.  Half of them in the village in France had FIV (felive immunodeficiency virus).  I never had Messy tested for it because she never showed signs of having it.  But maybe she had it.  Or the feline leukemia virus.  Both are ways to get cancer at an unfairly young age.  At least that’s my guess.  In retrospect, the escalation in peeing all over the bathroom that occurred over the last couple of years and became suddenly exponentially unbearable over the past six months, was a sign that there was something going wrong with her kidneys.  The diarrhea that wouldn’t clear up, not for all the antibiotics in the world, to me must have been renal cancer that metastasized (swelling the lymph nodes, causing her tooth to jut out at an odd angle?), blossoming into tumors in the bowels and stomach.  But I’ll never know for sure.

For a while I was so angry with her former owner who just threw her out to fend for herself, and with all the other people who’d dumped cats in my old village, so that a feral colony full of terrible viruses formed, cutting down cats in their prime.  All of those cats were nice cats.  Friendly cats!  Cats who didn’t deserve to be ill half their lives then die young in lingering, miserable deaths.  Miss Messy was my third cat from there that this happened to.  But she’d always appeared so robust and healthy, and never got into fights, and never had any wounds that wouldn’t heal, so I thought she’d escaped the curse.

But now the anger and the denial (she’ll just turn up again tomorrow, young again and optimistic and healthy!) are giving way to just missing her.  She was a great cat. 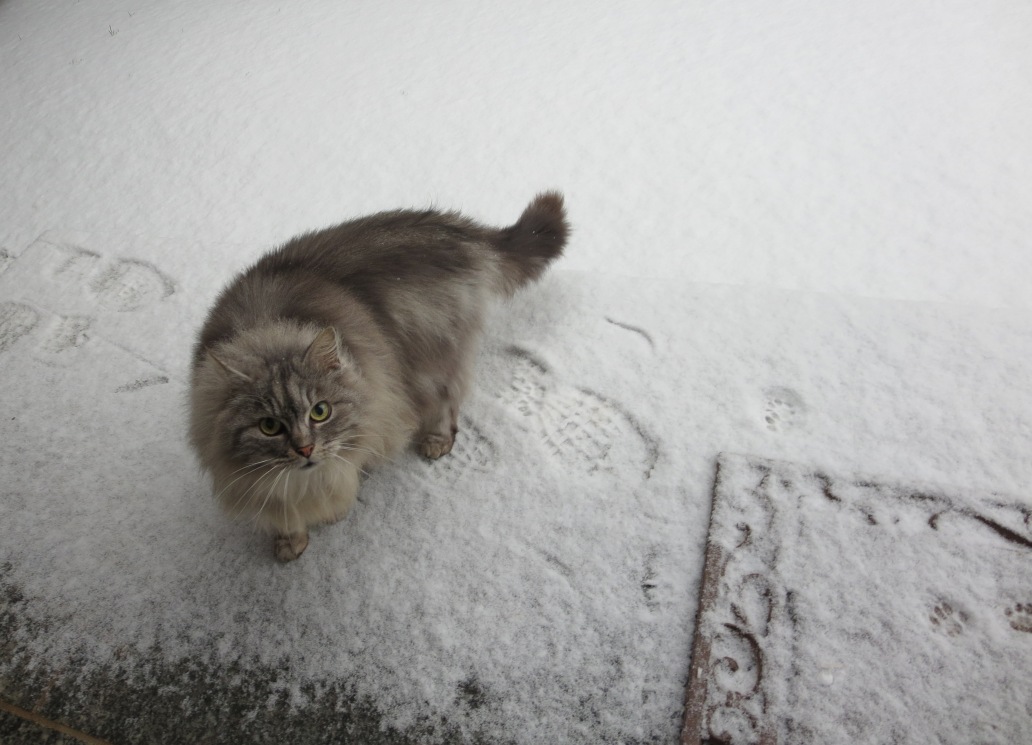